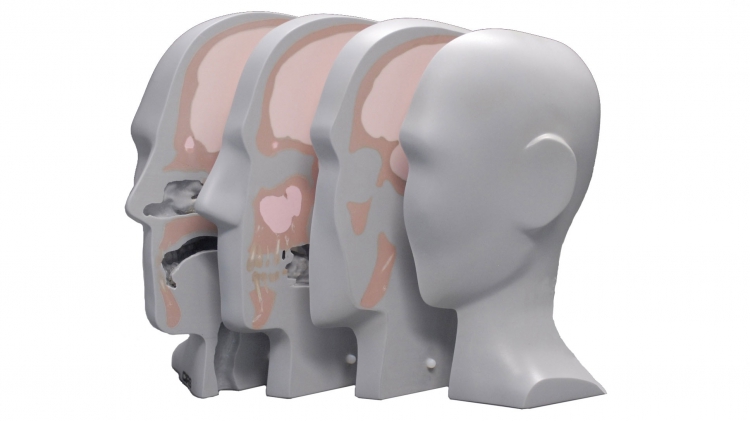 The phantom is constructed of CIRS tissue-equivalent materials, which mimic reference tissues within 1.5% for protons and within 1% for photons from 50 KeV to 15 MeV. The Proton Therapy Head can be used during all standard IMRT procedures from CT image acquisition to proton beam delivery verification1,3.

Model 731-HN approximates the average male human head in both size and structure to allow for intuitive set up with any patient positioning or fixation device.

One half of the phantom is sectioned in 2cm increments for three film locations in the cranio-caudal direction starting from the approximate center of the sagittal plane. Because slices are orthogonal to the CT axial plane, artifacts caused by residual air gaps are noticeably reduced compared to standard axial slices.

Proton system commissioning is enhanced by placement of a tungsten BB in a molar and a titanium prosthesis attached by two screws at C3 and C5 vertebra.