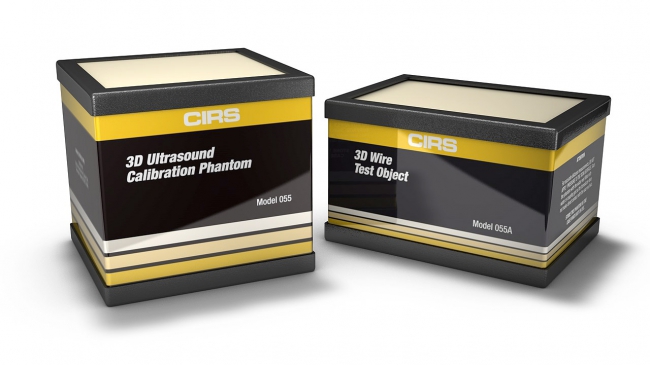 The Model 0555 Set consists of two phantoms, the CIRS Model 055 3D Ultrasound Calibration Phantom and 055A 3D Wire Test Object, as described in the AIUM publication “Standard Methods for Calibration of 2-Dimensional and 3-Dimensional Spatial Measurement Capabilities of Pulse Echo Ultrasound Imaging Systems”. These phantoms were designed to evaluate measurements taken on ultrasound systems using newer spatial encoding algorithms. This is especially important for the 3-D and 4-D ultrasound systems currently on the market.

Both phantoms are manufactured from the water-based polymer developed by CIRS called Zerdine® and housed in rugged ABS containers that minimize desiccation. The background is calibrated to mimic the ultrasound characteristics of human liver tissue. Unlike other phantom materials Zerdine is not damaged by changes in temperature.

The Model 055 3D Ultrasound Calibration Phantom is a volumetric target phantom and contains a small egg and a large egg. There are two scanning surfaces and the targets are off centered within the background material.

Depending upon what side is scanned, the test objects are located at distances ranging from 2 to 6 cm from the scanning surface.

The Model 055A 3D Wire Test Object is a wire-target phantom. In 2-D, the wires can be used to trace imaginary elliptical or rectangular shapes while, in 3D-mode, the same wire targets can trace out elliptical and/or rectangular rods. These are used to measure perimeters, volumes and surface areas. The phantom also can be used to determine image uniformity and depth of penetration.

The phantoms come with a carrying case a copy of the above referenced AIUM publication as a user’s guide and handling instructions.

Phantoms may also be purchased separately.